Michael introduced me to Cathy Davey when he watched the film The Disappearance of Alice Creed and her song Holy Moly was featured at the end. I do like Holy Moly, but I really love Little Red. It’s such a great song and I can’t wait to get the album it features on, The Nameless.

Cathy is an Irish singer-songwriter. She actually has three albums, the other two being Something Ilk and Tales of Silversleeve, and these are also on my to buy list! 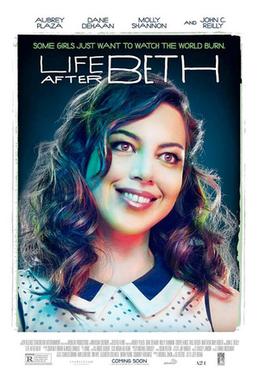 My verdict: I saw the trailer for Life After Beth a long time ago and I couldn’t wait to watch it. Then I read other people’s reviews and most people seemed to pan it, which was disappointing. I noticed it was on Netflix and decided to give it a go. I have to say that I did like it, but it was slow in parts and there was, as usual in films about zombies, no explanation for how the people came to be zombies. I think Aubrey Plaza is great in anything she’s in, and I have always been a big fan of John C. Reilly’s, so I would have watched it until the end no matter what. It’s a funny film and I’m glad that I watched it, but I wouldn’t rush to watch it again.

I have been a big fan ever since I was a child. One of the first things I ever bought with my pocket money was her Homecoming Concert on VHS (because I was only 11 and this was in 1990!). I was watching a Gloria Estefan YouTube Mix when this came on, and it immediately took me back to childhood. Such a great weekend tune!

I recently found out about Matt Adams and the Someone you Love project. Their About Me says: ‘Someone you Love is a three part video and photo series that aims to brings New Yorkers together by engaging them in positive activities in the unexpected places.’

The first video I saw was Write Someone You Love where Matt encouraged people to send postcards to people they love and the take-up was huge! At the end of the day, Matt took the postcards home, put stamps on each one and posted them in the mailbox for everyone. Such a lovely idea, and after I’d first seen this video, I hand made cards for my mum and grandparents, and they loved them so much. I would definitely do this again, as I enjoy crafting anyway, but making people smile is so worth it.

The links above take you to the webpages so that you can see all of the photos from the day, but you can take a look at the videos below!

I recently blogged about the lillies in my garden starting to bloom and I realised that I hadn’t followed up with photos of them since they have bloomed: so here they are! I haven’t measured them, but they are fairly large. We even have a baby stalk which grew late on and hasn’t flowered yet, bless!

I think the sun was too bright for my phone to take bright pictures, hence the “dull” appearance, but I think you’ll agree that the flowers look lovely anyway 🙂

I am a big fan of Netflix and the highly random things it suggests that I might like watching. Sometimes it works, sometimes it doesn’t. I would say that “BoJack Horseman” is definitely on the winner’s pile. Series 2 starts on Netflix on Friday 17th July and if you haven’t watched it, I recommend binge watching all 12 episodes before the big day.

So, who is BoJack Horseman? His Wikipedia page says, “In a world where humans and anthropomorphic animals live side by side, BoJack Horseman, the washed-up star of the 1990s sitcom Horsin’ Around, plans his big return to celebrity relevance with a tell-all biography that he dictates to his ghostwriter and recent love interest Diane Nguyen. BoJack also has to contend with the demands of his agent and on-again-off-again girlfriend Princess Carolyn, his freeloading roommate Todd Chavez, and his frenemy Mr. Peanutbutter, who is also Nguyen’s boyfriend.”

Below is the trailer for the second season of BoJack, just to whet your appetite!